The success of your dental practice, and your success as a dentist, is at the mercy of your staff. If you’ve got a great team that delivers amazing customer service, you will be able to build a very successful and profitable dental practice.

However, if you’ve got a team that is average, or below average, you’re going to be under a tremendous amount of financial and emotional stress as you have to constantly run around putting out fires in your business.

In this article, we talk about why you need to implement a strong accountability system to monitor and improve the performance of your team.

The Importance of Accountability

When we first began working with dentists, we would build them a great website, do their SEO, rank them high on Google, and create a great presence on social media– but we were surprised to find that in a lot of cases, none of this made a big improvement in their new patient count.

We were really curious to understand what was going on. So, we started to listen to every single call coming in, and… let’s just say that what we found was shocking.

Across nearly every dentist we worked with, customer service and the new patient experience were lacking. We found hundreds of instances of staff being rude or dismissive to patients, not taking the time to engage with them or answer their questions, and often talking to patients with a demeanor that said “I don’t really care”

Let’s take a look at some examples.

In this call the patient was looking for in-office whitening. The dentist had just implemented the Zoom whitening system a few months ago and wanted to promote it. Have a listen to how the receptionist handled the inquiry. Would you have been impressed if you were the patient?

In this call an existing patient had a procedure done recently and developed an infection. She called the office to book an emergency visit. Listen to what the receptionist said to the patient or her attitude. Would you be surprised to find out she decided to go to a different practice? The dentist didn’t even know about it.

This patient left 3 voicemails to try to book an appointment for her father but nobody ever called her back. Despite the staff claiming that they were calling back patients right away, this recording showed otherwise. When we reached out to the patient we realized she had decided to go to a different practice. No surprise there.

In this example, a new patient called the office to book an appointment. The receptionist answered but got distracted by a colleague and ignored the patient. You would think this may have been a technical issue where perhaps she couldn’t hear the patient but we found multiple examples like this one where this particular receptionist just didn’t listen to patients like this one.

You’d be surprised how many times we hear dental practices answer the phone with “hello?” leading the patient to think maybe they called the wrong number. It’s hard to recover from a poor first impression.

In this example, a patient had called for an appointment but the receptionist said the dentist was done for the day. She never bothered to ask for his name, what the issue was, or put in any kind of effort to try to help him.

From the tens of thousands of dental calls we listen to each month, what we often find is that, at best, customer service is lacking. Dentists believe it’s their marketing that is holding them back but in 90% of cases we find that dentists have enough new calls coming in they could easily double the patient flow without doing anything different, or spending more, when it comes to marketing.

What Dentists Had to Say

Take a look at what our clients had to say when we started to share our findings with them. We’ve removed the names to keep things confidential and not identify any particular practice, but this is pretty much the reaction every one of the dentists had.

Here’s one of our clients that operates a large cosmetic practice in Toronto that focuses on dental implants. He had spent hundreds of thousands of dollars over the last 10 years on marketing his practice and on training his staff and was under the impression that they were delivering world-class customer service. Here’s what he had to say when we shared with him a dozen call recordings showing him the experience new patients were getting when speaking with his staff.

Hi Nick. I’m absolutely appalled by this. I can’t believe this is my staff! I have so many questions… 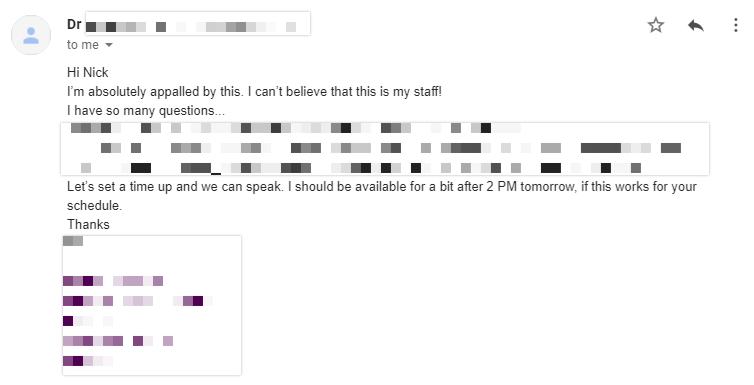 Here’s another quote from a large established office. Again, this dentist had spent thousands of dollars on marketing, consultants, and training. We shared with them a handful of examples of how new patient inquiries are being handled by their staff.

OMG! This is absolutely not the way I want my business handled. Thank you for bringing this to my attention. I will address it ASAP. 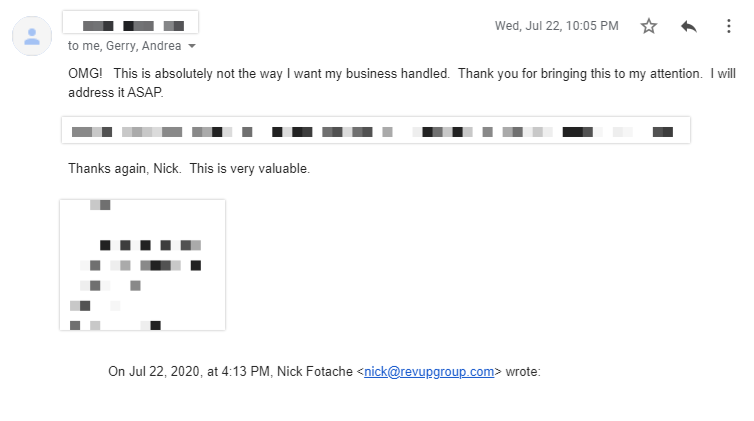 We got this reaction from virtually every dentist we worked with. One office manager said:

Wow, that call was very difficult to listen to. That was probably the worst customer service call I’ve heard on her part in the 2 years she’s worked here.

Notice that she writes, “…the worst customer service call I’ve heard…” But nobody was recording or listening to any of the calls coming in before we came along– so how many times did it happen in the past two years? This is like catching someone stealing and thinking “well they only did this once, so I’ll forgive them” but the truth is this is just the first time you caught it, not the first time it’s happened.

So, What’s Going On?

In many cases, the problem is that receptionists don’t really know what to say and they give patients the wrong information.

In one example, we had a patient call one of our clients to book a consultation for Invisalign. A new receptionist who had only been working there for 4 months told the patient: “Ohh… I don’t think we do Invisalign”

The patient was confused because he was looking at an Invisalign page on the client’s website. He thought maybe he called the wrong practice so he asks the receptionist if she knows anyone in the area that does it. The receptionist proceeded to give the patient directions to one of our client’s competitors down the street.

Now, this may sound like we’re bashing dental receptionists, but the truth is we were really shocked to discover this. We were just trying to figure out why new patients weren’t booking and we never expected to find what we found.

So how can you tell if this is happening in your practice? And, if it is, how do you fix it? Well, it turns out the reason this happens is that nearly all dental offices lack a strong system of accountability. This is what we started to implement into each dental practice. We did a few things:

Take a look at an email one of our dentists sent us:

The truth is, we didn’t actually do anything different on Google. All we did was implement a system of accountability and followed up with the staff about each patient and… things improved.

So if you’re not happy with the number of new patients you’re getting, ask yourself: “What am I measuring?”

You may be measuring how many new patients come in but are you also measuring things like:

If you don’t have answers to these questions then it’s likely that you’re missing a strong system of accountability in your office, and this is critical to building a successful and profitable dental practice.